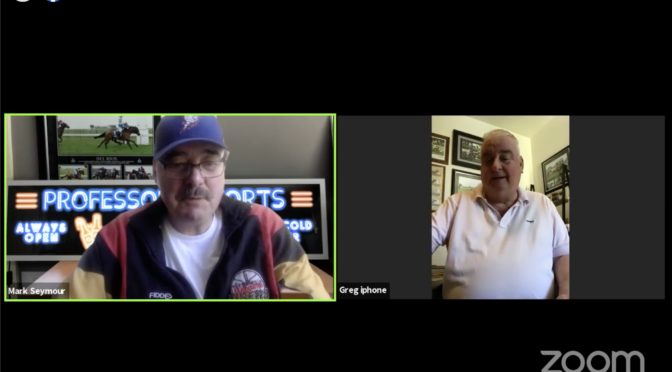 Mid week racing at Flemington. A pipe opener for the coming Spring Carnival. Today’s track is currently rated a Soft 5 with the rail out a whopping 14 metres for the entire circuit.

You can see the latest episode of That’s Racing!! on the Sportzfan Radio YouTube channel here. 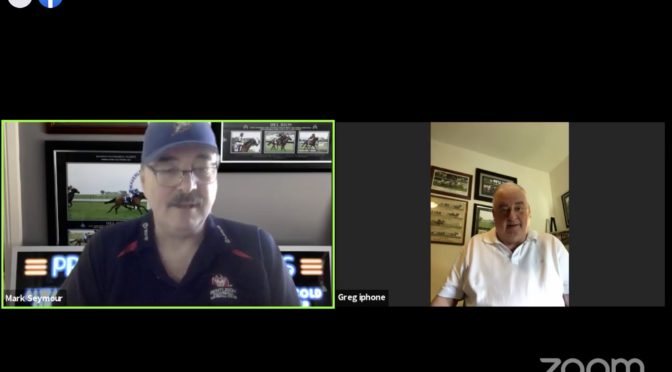 The Professor and the Gelding were in good form again last Saturday with two wins and two placings from their four selections. The suggestion to punters to place an all up place bet on the four selections was a good one as it returned 200%.

You can see today’s episode of That’s Racing here.

The Professor and the Gelding were right amongst it last week with a winner and three placings from four selections. They will look to do better today and turn the placings into winners! The track is currently rated a Soft 5 but is expected to be downgraded during the day due to overnight rain. The rail is out 9 metres for the entire circuit.

You can watch today’s episode of That’s Racing here.

The Sportzfan Radio panel will be back live on Facebook tomorrow from midday. The Professor and the Gelding had mixed fortunes last week. The Professor with a winner and the Professor’s Parlay saluting whilst for the Gelding it was some near misses. Both will be trying to do better today to round out the punting year at Caulfield. You can see them talk about today’s tips here.

If you’re looking for more value in the parlay substitute the second leg with Everton to beat Sheffield United (EPL).

The English Premier League ladder has an unfamiliar name on the top at the moment in Leicester City. They have obviously surprised everyone and are this year’s Southampton and the next month may indicate if they drop out of the top four as Southampton eventually did last year. Their next four games are Chelsea (h), Everton (a), Liverpool (a) & Manchester City (h). If they can split the points in those fixtures they may hang onto their spot in the top four, but as Southampton found out last year it is hard to maintain that consistency over the course of the season.

through the group stage of the Champions League after an extremely shaky start to the campaign. The home win against Bayern Munich was obviously the key with the return wins against Olympiakos and Dinamo Zagreb sealing the continuation of their run which I think is 15-16 times in a row they have progressed past the group stage.

There was also some good news for the Australian fans of the Gunners with the team coming to Australia in 2017. The bad news for Victorian supporters is that the two games they are scheduled to play will be in Sydney.

Well the big, but perhaps not surprising news this week, was the sacking of David Moyes at Manchester United. I usually would not feel sorry for anyone associated with that club, however, Moyes seems to have been on a hiding to nothing taking on the position after the retirement of Sir Alex Ferguson. He was cursed with injuries to key players like Van Persie and he did not have the opportunity to make any significant player purchases. Ferguson’s support for him seems to have not translated to any form of assistance within the club. Having said that, by all reports, he has not assisted his position by making changes to the coaching staff which appear to have been unpopular with the players and it would also appear he hasn’t engaged the players on an interpersonal level. It is ironic that his demise followed a second loss to his old side Everton, who, with largely the team he established, are pushing for a Champions League position. It will be interesting to see if he gets another major position as a manager. I think based on his time at Everton he at least deserves another chance.

The big issue in the AFL at the moment seems to be the congestion prevalent in games and the game suffering as a spectacle as a result. Well I went to the Essendon -v- St Kilda game last Saturday night and it was not necessarily the congestion that was the problem, it was the pointless kicking backwards and sideways by both clubs, particularly Essendon. This led to what I felt was one of the most boring games of football I have ever attended where the scores were relatively close. I didn’t check the stats, but in the first half there would have been around twenty tackles between the two sides. It was like watching circle work at training or like soccer getting a team on the break. The second half was a bit of an improvement, but not by much. I think if coaches serve up too many games like that then the game will lose spectators and the TV audience. Having said all of that, I watched the latest instalment in the Hawthorn v Geelong rivalry on Monday and while there was some congestion in that game, what a great game in a long line of great games between these two clubs.

Lastly, it is worth mentioning the Stawell Gift. Has there ever been a closer Gift? I doubt it, all of the participants going over the line within two tenths of a second, amazing!

Have a great long weekend!

Due to coming public holidays this is the first in a series of two Thursday musings!

With Good Friday tomorrow, the attention turns to the AFL and the “will they/won’t they” sanction a game for next year. I must say that I used to be against it on the basis that the day was always sport free. However, now that other sports are cashing in on the day, I would be happy to be able to sit down on Good Friday night and watch a game of football. Having said that, I would prefer that my team was not playing.

Sticking to football, this one is slightly out of left field. Since Dale “Daisy” Thomas cut off his hair he has hardly played a good game having previously been one of the better players in the AFL. My solution is that he grows his hair back. ou take away someone’s trademark and they are not the player they used to be. I also cite the historical reference to Stephen “strawbs” O’Dwyer who used to play for Melbourne, he had very prominent ears, but as soon as he had his ears pinned back he hardly played a good game. I am sure there other ones as well, like Keith Greig’s ankle bandages, although I doubt he ever removed them.

Better news for the Arsenal fans over the last couple of days. They scraped into the FA Cup final and then in the Premier League they beat West Ham and Everton lose to Crystal Palace to allow the Gunners to reclaim the all important 4th position. They now have their destiny in their own hands and it would be a great finish to the year to take out the first bit of silver wear for 9 years and qualify again for the Champions League. It also looks like Liverpool are favourite to now take out the League title with Man City only getting a draw against Sunderland. What an amazing turnaround from last year when I think they finished 7th.

Have a great Easter!

With the US Masters now started, I thought it was worth remarking about those two fantastic shots from Matt Jones to qualify him for the Masters. First he drained a 45ft putt to make the play off and then he wins it by chipping in from off the green. Two miracle shots. My original selection for the Masters was Jason Day as I have selected him to win a major this year, however, his first round would indicate that he may not have recovered from his thumb injury so I will have to revert to the reigning champion, Adam Scott.

On a different note, I was thinking about the way Bomber Thompson is coaching at the moment and it brought to mind the change in the Australian Cricket team performance once Darren Lehman took over. Both men take a relaxed approach to their coaching which appears to bring about the best in their teams. One thing I have noticed about the Essendon team this year is that their disposal efficiency has improved immeasurably from previous years. Maintaining that efficiency throughout the season will be the big test as, like my EPL team, Arsenal, they have fallen away at the end of the season recently.

While on the football it is worth commenting on “the bump”. I think everyone who has seen the Nathan Fyffe bump and the Daniel Merrett forearm cannot believe they have been graded the same. Fyffe’s bump was an accidental clash of heads which resulted in a charge under the new AFL rules, whereas Merrett’s was an old fashioned whack which should have gotten four weeks. I think if there are many more incidents akin to the Fyffe suspension, the AFL will need to amend the rules, because in a contact game you cannot or at least should not be suspended for something which was accidental. Australian Rules football is a contact sport and accidents will still happen.

A very disappointing result for Arsenal in the EPL last week losing 3-0 to Everton and now jeopardising their Champions League position. Should they lose the fourth position to Everton and not win the FA Cup, there is every chance that Arsene Wenger will not be asked to continue with the team which would be a shame in my opinion. The owners are finally loosening the purse strings and he may miss out on building the team up again. I also read an interesting article in The Age during the week about Patrick Vieira the last Arsenal captain to raise a trophy. He is working with the Manchester City Under 21 team and enjoying the role. I am not suggesting he is a manager in waiting as it would seem he is a long way off that, but worth keeping an eye on his progress.

26 September 2010 172.2 – Mordiboy thinks this is a great chance for the AFL to play a night Grand Final. The Professor suggests the AFL could use Mark Seymour for entertainment at the GF replay. Paul says if they used INXS again, ‘New Sensation’ would be ‘Old Sensation’. The ‘F’ word is worried that the first A-League Melbourne soccer derby between Victory and Hearts is going up against the AFL Grand Final replay. He thinks 20,000 will be there to see the game and tips a draw. Mark has jumped off the Heart bandwagon and is heading back to the Victory. In Premier League Mark was surprised Arsenal lost at home to West Brom, shocked Liverpool lost mid week in the Carling Cup and doesn’t look good for Everton on the bottom of the League. Paul talks NRL with the preliminary finals having been completed with the Sydney Roosters belting the Gold Coast Titans and St George getting over Wests Tigers. He will be at the Grand Final next week via a ticket from a friend from another team. Sean joins in from the Royal Show and discusses the problems created for Collingwood and St Kilda by the Grand Final replay and was thrilled to be at his first ‘live’ Grand Final. He also discusses the Commonwealth Games problems in Delhi. Daniel believes if security can’t be improved they should be called off. Paul worries that Todd Carney may miss the Grand Final due to a high tackle. Stan thinks he will get off though as contact was first in the chest region.