The Professor and the panel of the Judge, Sarah Radlow and the Gelding talk with special guest, SEN’s Brett Phillips about the coming Australian Open and whether players will need to be vaccinated to enter Australia. They also speak to Sean Callanan about his nomination for the Collingwood FC Board, the Gelding reviews the four day Flemington carnival and they discuss private equity firms getting involved with Cricket Australia and whether that would ultimately be good for the ‘grass roots’. An ordinary outing for the tipsters on Oaks Day but, as the Sydney Colt says, as long as the confidence is not lost we’re OK. The track is currently rated a Good 4 but there are showers forecast during the day. The rail is out 8 metres for the entire circuit.

The Professor and the panel of the Judge, Sarah Radlow, Coutta and the Gelding will be talking sport on the Sportzfan Radio YouTube channel from 12.00pm AEDT tomorrow with special guests, host of SEN’s The First Serve, Brett Phillips and Collingwood FC Board nominee and Sports Geek, Sean Callanan. The Professor and the Gelding were back in form on Wednesday at Sandown and they are both looking to improve on those results at Flemington today where the track is currently rated a Soft 6 with the rail in the true position.

The Professor and the panel of Paul Dalligan, the Gelding and Coutta will be talking sport tomorrow on the Sportzfan Radio You Tube channel from 12.00pm AEST. Tomorrow’s special guest Sports Geek and Gravitas owner, Sean Callanan will be talking about beer (Gravitas Glory) intersects with eSports. 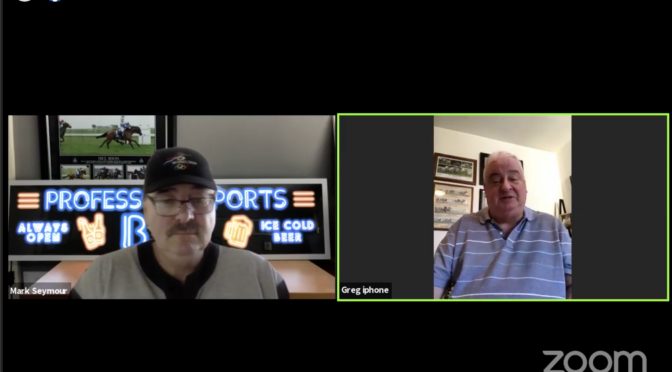 Rain played a big part in last Saturday’s results and seems certain to act as a spoiler for punter’s trying to pick a winner today at Caulfield. Both the Professor and the Gelding caution punters to check the track rating and the pattern of racing during the day before placing their bets.

The track is currently rated a Soft 7 but will probably be downgraded during the meeting. The rail is out 12 metres for the entire circuit.

The Professor and the panel of the Gelding, the Judge, Paul Dalligan and Dan Butterly will be live on Sportzfan Radio’s YouTube page from 12.00pm AEST tomorrow. Special guest will be the the Sports Geek, Sean Callanan.

The Professor and the Gelding were in rare form last week with three winners and a second from four selections and the Professor also got his weekend parlay across the line. The Caulfield track is rated a Soft 6 with the rail out 9 metres for the entire circuit.

You can watch the Professor and the rest of the Sportzfan Radio panel when they go live on the Sportzfan Radio Facebook page at 12.00pm tomorrow. Special guest – Sean Callanan will explain the ways grassroots sporting clubs can use social media to remain solvent and maintain the bond between Clubs, players, sponsors and supporters.

A great initiative from the Southern Football Netball League in presenting a seminar that will provide tips to community clubs on sports marketing in the digital age.

Featuring Senior Associate Commissioner Dan Butterly and Sports Geek Sean Callanan, the seminar will be held on Wednesday 13 May 2015 starting at 6.30pm at Clayton Football Club rooms.  Both Dan and Sean are former Sportzfan Radio contributors and have a long history in sports marketing.

Dan is responsible for branding and marketing the Mountain West Conference which forms part of the National Collegiate Athletic Association (NCAA) in the USA. He is the key person involved in marketing, promotions, merchandising, licensing and advertising.  The Mountain West comprises 12 colleges in 8 states of the USA with almost 6,000 student athletes involved in 15 different sporting disciplines.

The Mountain West has been a very successful conference having, in the last 16 years, had one of their student athletes selected as the number one draft pick in the NFL, MLB and NBA drafts. That includes Australia’s own Andrew Bogut who was the first Australian drafted at number one into the NBA.

Sean Callanan or the Sports Geek, as he is better known in sports digital

circles, is at the cutting edge in the field and his expertise has seen him develop a client base in both Australia and internationally.  He
provides advice to teams in the NBA, AFL, NRL and cricket and is also a much sought after presenter at any seminar covering his area of expertise. He is fresh from presenting at the SEAT conference held in March 2015 in London.

This is sure to be an opportunity not to be missed to hear two  leaders in their respective fields.

27 November 2011 228.1 – Due to another technical glitch, we lost the first few minutes of the show but we come in with the Sports Geek, Sean Callanan talking sports digital and social media with sports personalities in the news for the wrong reasons like Jabar Gaffney and Josh Hunt. Aston Kutcher also had problems tweeting on sports. Sean comments that the AFL draft looked terrible and was a missed opportunity. The Gelding is back to talk horse racing after his week off and returned to form even though the Sandown track was very heavy. Sportzfan Stan has umbrage that the Professor cut him short to take the Gelding’s call and says he takes a dim view of that but refrains from sacking anyone. Stan talks cricket and says it appears the selectors have got rid of most of the dead wood although he hasn’t heard of the new players selected for Australia.

3 July 2011 208.2 – Mark Fiorenti thinks Harry Kewell will sign with Melbourne Victory. John O’Callghan is back for the second time for the year as a special guest. He advises that the annual Olive Branch Achievement Award has not been awarded again since it was given to Kevan Gosper. There is also a discussion about Father/Sons in AFL and in sport in general that is propmpted by an email from Chris from Barwon Heads. John O’Callaghan talks about the AFL players wanting more money and says their grab for more money is misconceived. Paul Dalligan comes on to talk NRL and State of Origin. He also talks about having the chance of sitting in the LA Dodgers press box during his recent US visit.  He says he has heard more noises in doctor’s surgeries and libraries that in the press box. John looks at Bernard Tomic’s announcement that he is considering living in Monarco. He doesn’t believe that either he or any other athlete needs to pay back any money that has been put towards helping the athlete. Sean Callanan talks about his trip to the USA and assisting the Minnesota Timberwolves with a product known as Sports DP.

12 June 2011 206.2 – The Professor queries when Daniel is going to attend a production meeting at the Great Western Hotel. Mark Fiorenti comes on the show to talk soccer & the Socceroos. He is bullish on Holger Osieck’s coaching and also the young players he tried in last week’s friendly matches. There is also a discussion of the problems confronting FIFA with corruption claims and the rumors that Cesc Fabregas will leave Arsenal for Barcelona. Mark thinks time might be running out for Arsene Wenger. Daniel and the Professor discuss NBL and the plight of the Sydney Kings who are thought to be in debt again. They also look at cricket with Simon Katich’s axing, the review into Cricket Australia and the selectors. Stan sacks the lot. Paul Dalligan talks rugby league and the coming State of Origin match. He thinks NSW will win 16-12. He also reviews the current NRL round. The Panel look at the dangers of spectators running on to the field at AFL games. Sean Callanan talks about his coming trip as Sports Geek to the US. He will meet with the NBA, see some Mets and Yankees baseball and then assist the Minnesota Timberwolves during the NBA draft in engaging the fans on line.

5 June 2011 205.2 – The Professor talks soccer and the Socceroos with Mark Fiorenti and the upcoming friendlies against New Zealand & Serbia. He says it will give Holger Osieck a chance to look at the young players and what they can do. Paul Dalligan comes on to talk NRL and also the recent production meeting at the Great Western Hotel. Showing he is an all rounder when it comes to sport, he also gives an opinion on tennis and the French Open. Sean Callanan discusses the sale of the Detroit Pistons and NRL players getting themselves into strife using Twitter. He believes that the Tout app may be the next big thing as far as sports people are concerned in making short 15 second videos.